What exactly is hand-foot-and-mouth disease?

Hand-foot-and-mouth disease (HFMD) is a contagious disease caused by a virus. While one of several viruses can cause it, the signs are usually the same:

You can catch HFMD from having close contact with a person who has it. You can also catch it when you touch something, such as a toy or doorknob, contaminated with a virus that causes this disease. 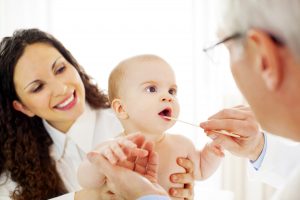 A child with hand-foot-and-mouth disease can often experience painful mouth sores that last for 7 to 10 days.

While many people worry that they can get HFMD from a pet or other animal, you cannot. Animals cannot get HFMD.

In the United States, HFMD tends to be mild. It usually:

When HFMD clears, the person who had it develops an immunity to the virus that caused the disease. Because several viruses can cause HFMD, some people get HFMD again from a different virus.

In the United States, most people get HFMD during the spring, summer, or fall. That’s when the viruses that cause it are most likely to spread. In the tropics, HFMD tends to occur year round.

How long is someone with HFMD contagious?

People who have HFMD tend to be most contagious during the first week that they have the virus.

To prevent spreading the virus to others, the Centers for Disease Control and Prevention (CDC) recommends keeping a child with HFMD home until the:

The CDC recommends this because children often have close contact with each other, which can spread the virus.

You can see what HFMD sores look like at: Hand-foot-and-mouth disease: Signs & symptoms

Tattoos: 7 unexpected skin reactions and what to do about them

5 common sunscreen mistakes — and how to avoid them

© 2021 American Academy of Dermatology. All rights reserved. Reproduction or republication strictly prohibited without prior written permission. Use of these materials is subject to the legal notice and terms of use located at https://www.aad.org/about/legal